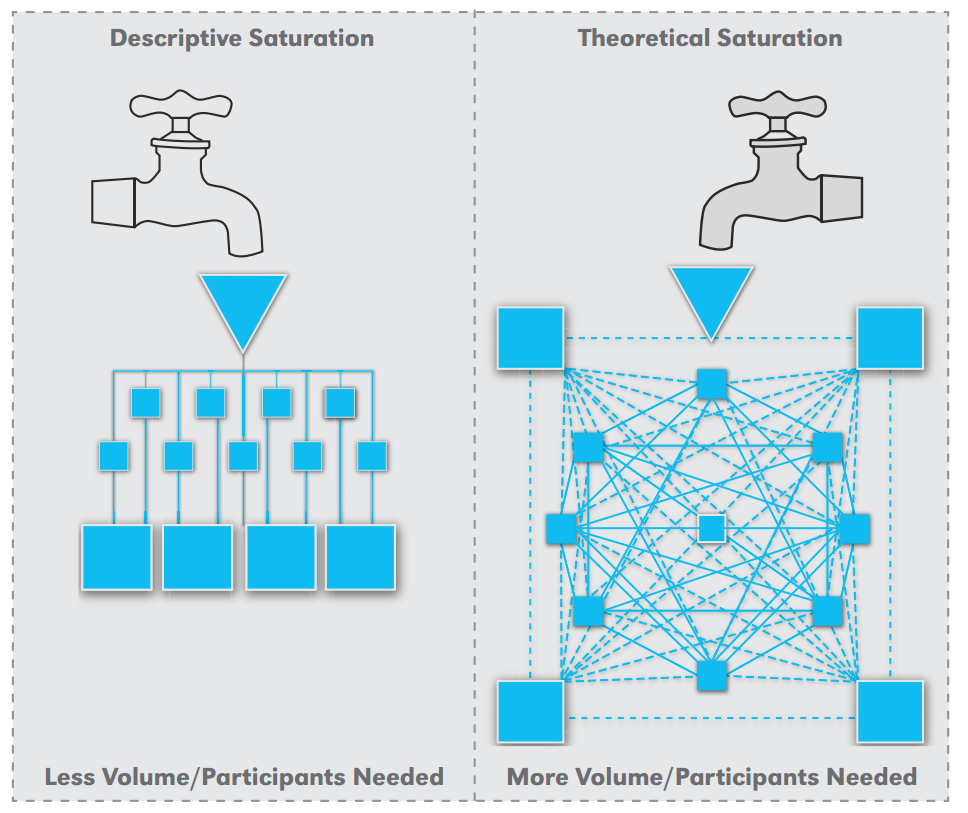 Unlike quantitative research which aims to quantify or count the number of opinions, the aim of qualitative research is to explore the range of opinion and diversity of views, and collect “rich information”. The number of participants required therefore depends on the nature of the research and how many are needed to answer the research questions. The focus generally is not on sample size but rather on sample adequacy because generalisability is not what you are aiming for. Hence, the adequacy of sampling is usually justified by the reaching of “saturation” (Bowen, 2008) and is used by researchers as an indication of quality (Guest, 2006).

Bowen (2008) argues that researchers are not being transparent about exactly how saturation is reached, and highlights there are also practical constraints in terms of time and resources on how many participants can be interviewed, and sometimes saturation cannot be reached. O’Reilly and Parker (2012) explain that this does not invalidate the findings; rather it means that the phenomenon has not yet been fully explored, and this should be reported with the findings.

The different types of saturation

There is also some confusion about the different terms used to describe saturation in literature (such as thematic, data, theoretical, descriptive), and they can be distinct. However, generally:

The diagram below (taken from here) illustrates the difference between the two types of saturation (please note the diagram refers to thematic/data saturation as descriptive saturation):

Is it possible to ever reach “saturation”?

Saturation does have a practical weakness, in that there is always new data to be discovered and data can never be truly saturated (Wray, Markovic and Manderson, 2007). Studies in particular which use a deductive approach where the research is not guided by types of revelations or ‘categories’, some argue that imposing data saturation as a quality indicator is not always relevant (O’Reilly and Parker, 2012).